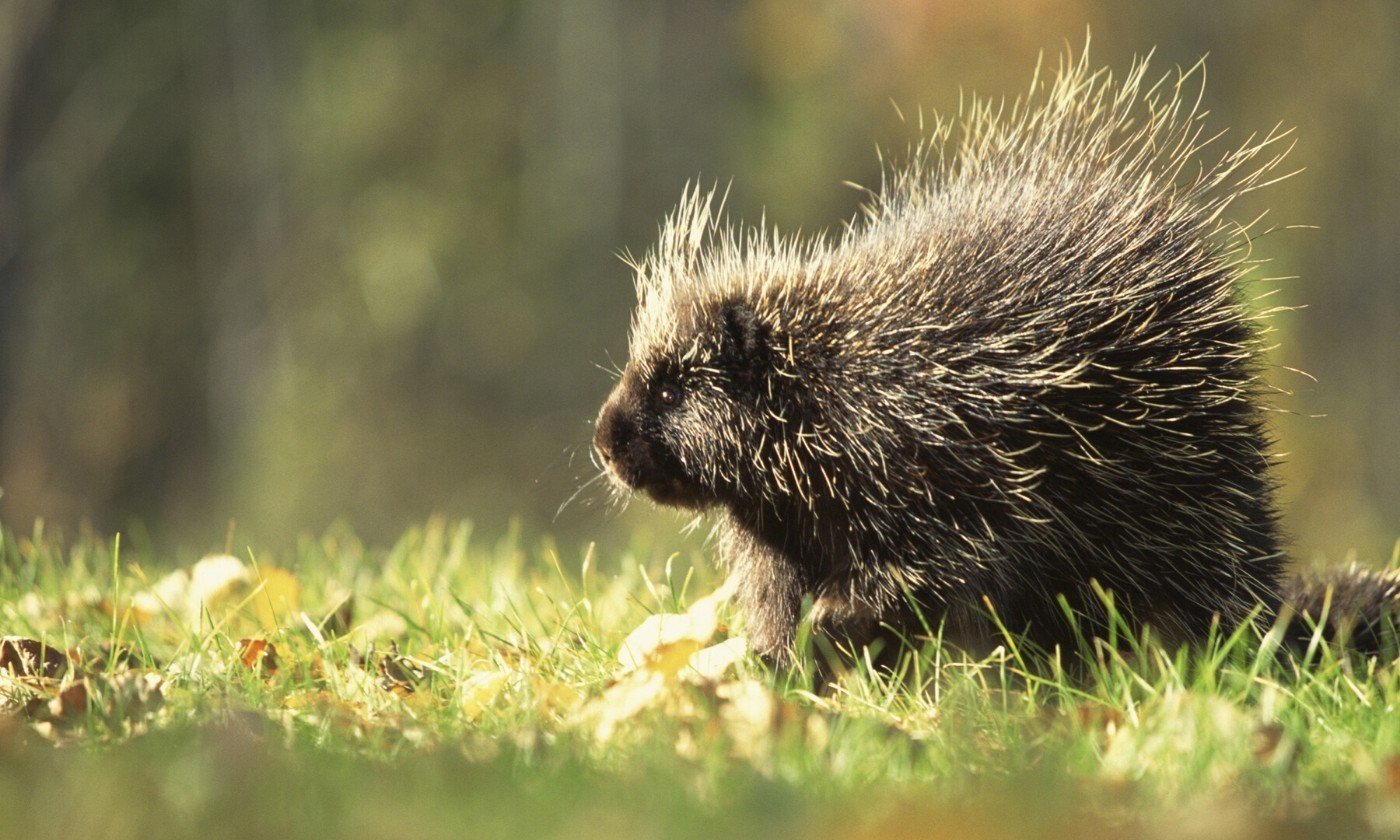 MADISON, NEW HAMPSHIRE — “She’s rarin’ to go. She wants out of that cage,” Cathie Gregg said as she opened the back of her truck. Gregg tossed back a sheet over a portable kennel to reveal a full-grown porcupine, pacing slowly back and forth, the animal’s shaved belly the only remaining sign of the C-section she received last month.

“She has been an experience,” says Gregg. As director of Elaine Conners Center for Wildlife in Madison, she has seen more than 8,000 wild animals come in for rehabilitation over the last 10 years. However, the porcupine she returned to the forest this week was one of a kind.

On Friday, March 23, Gregg received a call from Chris Fournier of Conway, who told her that his children, Brian and Christine, had found an injured porcupine near their house. A snowstorm and subsequent power outage kept Gregg from getting back to Fournier until Saturday, when she took the ailing porcupine back to the wildlife center. The animal could barely move, and would not be able to survive without rehabilitation. Gregg assumed the adult female had been hit by a car and that she was suffering from fractures or broken bones. She made the porcupine comfortable at the wildlife center, and that Monday, transported her to Fryeburg Veterinary Hospital, where Dr. Scott Johnson gave the animal a full-body X-ray.

“You can’t just pick them up like a kitty.”

Later that afternoon, Gregg received a call from Johnson that started one of the most unusual wildlife rehabilitations she has ever done. “The porcupine was in labor, with the baby caught in the birth canal,” Gregg said. With the mother’s life in danger, Johnson had no choice but to prepare for his first C-section on a porcupine. Although he said C-sections are fairly common for small-breed dogs and the occasional cat, Johnson said the porcupine was a different matter altogether. “It was difficult with mom because you can really only get to their underside. That’s the only part without quills,” said Johnson, “You can’t just pick them up like a kitty.” The entire operation took about a half-hour, resulting in the birth of an 11-ounce male porcupine, considerably underweight. Gregg says the normal size for a newborn porcupine is about 16 ounces.

Johnson says this was the first newborn porcupine he had ever seen. “I’ll tell you what, there’s nothing cuter than a little baby,” he said, “The porcupine was unbelievable in his own ugly, little way.”

“When an animal is at stake, I have no pride,” says Gregg, “I’ll pull out all the stops.”

Hospital workers kept the baby warm and comfortable while Johnson stitched up the mother, using absorbable sutures so he wouldn’t have to take out the stitches later. Gregg took the groggy mother and her little one back to the wildlife center for recovery, but that evening, the underweight baby took a turn for the worse. “When an animal is at stake, I have no pride,” says Gregg, “I’ll pull out all the stops.” That she did, when the tiny porcupine had a seizure and nearly stopped breathing. Gregg called Fryeburg Veterinary Hospital to tell them she was on her way, but knew the baby wouldn’t survive the half-hour drive. Running out of time and options, Gregg called MedStar in West Ossipee to see if the EMTs there could help.

Scott Schwartz has been an EMT for six years, working for the last year and a half with MedStar. He and Paul Carrier, both emergency medical technicians, helped Gregg when she arrived with her prickly patient. “Basically, we made an incubator,” said Schwartz. The animal rescue was a first for him too, who, along with Carrier, gave the porcupine oxygen, found a pulse, and stabilized him. And while the baby’s few spines didn’t bother Schwartz, he concluded, “People are easier. They tell you what’s wrong, usually.”

Gregg returned to Fryeburg Veterinary Hospital with the porcupine and two canisters of oxygen donated by MedStar, where Johnson rehydrated the baby and got him to suckle from a bottle. However, the baby was still having trouble breathing. Upon returning to the wildlife center, Gregg realized she needed more oxygen to make it through the night. More phone calls found additional support from local residents, willing to help. “There are an awful lot of very nice folks in the valley,” she says.

Even with the help of so many, the little porcupine was too premature to survive. His mother had produced no milk, so he couldn’t nurse, and Gregg thinks his lungs hadn’t fully developed. She says that the long winter, late snow, and dehydration may have caused the mother porcupine to go into labor prematurely. However, if not for the two children who found her, the mother would have perished along with her baby.

Still waiting for the fur to grow back on her belly…

The mother porcupine has made a full recovery, although she is still waiting for the fur to grow back on her belly. Gregg says she typically tries to release an animal in the same area it came from, unless human encroachment makes that impossible. While Gregg couldn’t leave this animal in exactly the spot the Fourniers found it – near their home – the porcupine will still be able to live in that general area.

“I’m really sorry the little guy didn’t make it, but I’m glad she made it,” said Johnson. As far as the porcupine’s C-section, he says, “It was our first and hopefully our last.”

Elaine Conners Center for Wildlife sees anywhere from 600 to 800 wild animals each year. While Gregg may be used to handling these animals, she cautions people about picking up any wild creature, especially baby animals that seem to be abandoned. Instead, Gregg asks that people call her at 367-WILD if they see an animal they believe needs assistance.